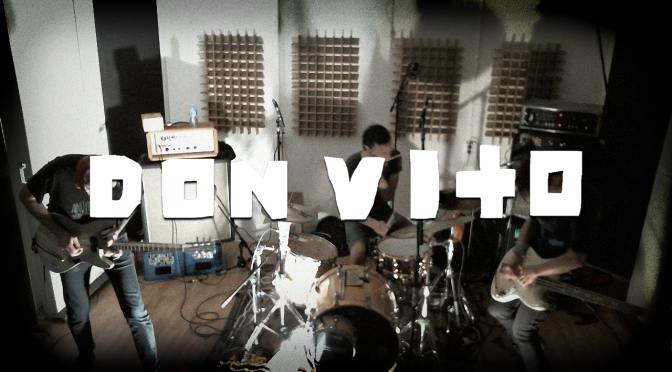 Don Vito, as someone said: “They play like
children in a sandbox, with a sound like a Minuteman landing on an aircraft carrier platform, and
the musical understatement of a Chicago jazz band.” (Lutz Schramm, Paroptikum, Germany)

Don Vito are a Leipzig three-piece that bash out playful and naive yet shrill and abrasive noiserock. It sounds like the soundtrack to a cartoon children’s disco in a steel factory.
The band’s description of their music “hyper kinetic instrumental noise tohubohu” couldn’t be any
more accurate. The moment Don Vito let a bit of chaos out of the sack all appendages within
hearing distance begin to fidget hysterically. It is like being hit with the spray from a machine gun.
Welcome the apocalypse of rock smiling at you from three lunatics who appear to thrash at their
instruments more than to play them. But somehow they never loose continuity in this chaos of
interwoven high speed-grooves. Don Vito does not need to follow the rules; the rules have learned
to follow Don Vito.
Remarkably, they are free from genre and categorization. They have delightfully blended postpuberty carelessness with just a touch of self-irony. From now on, you will no longer have to think
of that brainless wanker from Jackass when you hear the name Don Vito, but rather of that kick-ass
band from the bowels of Germany.
(Barry Lennon, Dublin, Ireland)
—Don Vito – advanced noise creators and one of the neatest outfits there are. Hardly anyone in that
genre has accomplished a tighter match of two antagonisms – chaos and structure. Don Vito is a
monstrous maelstrom from Eastern Germany, pushing the concept of Noise to a new level of
forcefulness, at times very danceable.
(Discorporate Records, Dresden, Geramany)

—Don Vito are an intense three-piece from Leipzig in Germany, consisting of a
drummer, guitarist and bassist. This may sound like a boring description of any
‘normal’ band but in the case of Don Vito, it’s far from the truth. Don Vito are
experts in supreme tightness; there is no other band that can make such loud
noise with such creativity and step away from using rock instruments
‘traditionally’. The sudden changes of rhythm, playful drum rolls and
passionate shrieks leave you thrilled and out of breath. They’re a teaser to the
ears, offering complexity, speed and metal-based rollercoasters in 50-secondsong
brilliance. Don Vito are the godfathers of storm-lighting noise.
(Liane Escorza, Nightshift Magazine Oxford, UK)
—Don Vito are a frantic, noisy punk rock 3-piece from Leipzig, Germany. Nasty, quirky and very
imaginative, they come armed with a tightly wound live sound that’s been honed by relentless
touring in mainland Europe. Like Action Beat, they also know how to write a coruscating guitar
groove, but they choose to punctuate theirs with stuttering math-rock stabs and off-kilter gang
yelps.
(Decorum Records Bristol, UK)

White Noise Sessions: Sessions from the White Noise Studio in Winterswijk, The Netherlands.
Home of the underground. The sessions are live recorded sessions in which bands bring their best! We love bands who are left of center, interesting, thought provoking, weird, awesome, mind blowing or just plain good.[/vc_column_text][/vc_column][/vc_row]