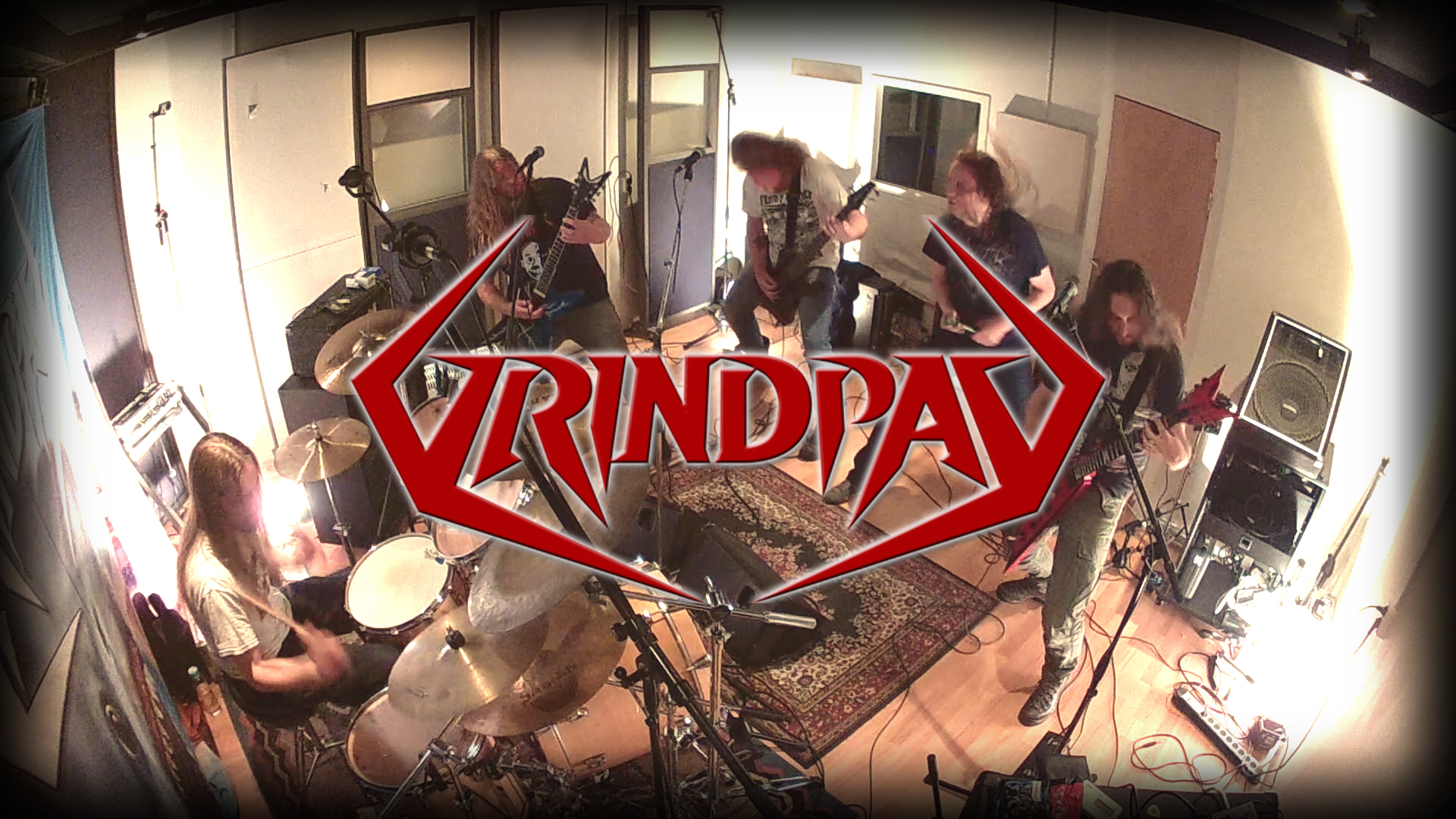 Grindpad is an awesome powermetal / trashmetal band from the Netherlands. They visited the studio to do a very trashing set of 5 songs. Bang your heads!

They played the next songs, of which 3 are unreleased at the moment of recording this session.

– Burn The Rapist
– Sharkbite!
– To Those About To Die
– The Knife Is Sharper Than Ever
– Not Fucking Dead…

Grindpad: Puttin’ back the violence in Metal .
In autumn of 1986 (ok, 2006…), guitarist JG was asked by some local musicians to join a metal project.
An on & off thing, nothing serious by that time. The name Grindpad was mentioned every now and then.
After a few months, Axel joined the (then still nameless) project.

Although it was more of a Death/Grind-band back then, JG and Axel soon realized that this Grindpad project was the perfect vehicle for them to use, to release for their hunger to make old-school violent Metal.
Bored to death by the whole new wave of the countless gutless, whiny, death/core/fashion/whatever-bands, they knew that there was a place for them to bring the aggression back in Metal, as if it were a 1985 Exodus show!
From mid-2007 on, Grindpad became the official name, and the machine started rolling. Cool shows and two EP’s, leading Grindpad to win the Dutch Metal Battle in 2010.

More shows followed among which were Occult Fest and shows supporting Bolt Thrower, Benediction & Tankard. Bandmembers came & went, but the two-guitar-assault-engine (JG & Axel) always stayed the same. Then, in 2011 the machine collapsed when three out of five members left… Instead of quitting, JG & Axel were more determined than ever to keep the monster alive.
It didn’t need to be ‘brought back’; it was never dead… Having never been fully satisfied with the musical direction, they decided that now was the time to switch one hundred percent towards the music that they always wanted to bring: violent, aggressive, old-school, non-melodic, merciless, hacking THRASH!
The philosophy being: one Slayer / Exodus / Pantera song destroys an entire deathcore-army in terms of sheer energy and aggression.

In 2012 Olivier and Remy joined Grindpad.
With Olivier’s aggressive vocals and Remy’s pounding low bulldozer sound, the whole band was in the right mindset, and started writing an entire new set of songs.
To help out on drums Paul Beltman (River of Souls, Ex-Sinister, ex-Judgement Day) was willing to put in his aggressive no nonsense drums and Grindpad was ready to attack again.
Now armed with their new EP “SharkBite!”. Grindpad will always bring you what is mostly neglected in Metal nowadays: aggression, violence, anger. Because THAT is what Metal is all about and should always be. Nothing less.
And man does Grindpad get it…

White Noise Sessions: Sessions from the White Noise Studio in Winterswijk, The Netherlands.
Home of the underground. The sessions are live recorded sessions in which bands bring their best! We love bands who are left of center, interesting, thought provoking, weird, awesome, mind blowing or just plain good